3:30 p.m. : @Helen Given the enormous machinery that the Grande Boucle represents, it would not have been possible to postpone it. And the epidemic outbreak is real, but does not translate into a huge increase in hospitalizations and deaths. I refer you to our dashboard updated each evening.

3:28 p.m. : Why didn’t you wait until later to do the Tour de France? Maintaining it in a context of an outbreak is irresponsible on the part of the organizers.

3:37 p.m. : The tricolor rider Pierre Latour, who is aiming for the polka dot jersey, takes the lead at the top of the Col des Mosses, and wins the five points that go with it. The leader of the mountain classification, Magnus Cort Nielsen, has 11.

3:15 p.m. : UAE seems more incapable than ever. A blow by Ineos or Jumbo and Pogacar would be reduced to 2-3 guys in the last 90 kilometers

3:15 p.m. : According to former Danish climber Michael Rasmussen, “The Emirates team looks more takeable than ever. An attack by Ineos or the Jumbo and Pogacar would end up with two or three team members, with 90 km to go.”

3:12 p.m. : While the breakaway is 3 minutes ahead, the UAE team is working at the front of the peloton to prevent Rigoberto Uran from becoming a virtual yellow jersey, with his 3’24 behind Tadej Pogacar.

3:11 p.m. : When the road rises, the gruppetto is created. All the runners allergic to the mountains spend ten stages sweating, far from the cameras. So as long as it is done in good intelligence. I describe how it happens in this article.

3:03 p.m. : It is today that thousands of amateurs are climbing very steep slopes as part of the Tour stage from Briançon. This great one-day race, open to all those who dream of the Grande Boucle, is celebrating its thirtieth anniversary.

2:45 p.m. : Some spectators have paid in person to witness the exploits of the runners with their offspring.

2:44 p.m. : Nearly 100 km from the finish, the peloton led by the Emirates team of Tadej Pogacar contains the breakaway of 21 riders including Thibaut Pinot and Wout van Aert. Barely 3 minutes in advance, which should not be enough to play for the win when attacking the ascent of the Col de Mosses, classified in 2nd category.

2:29 p.m. : The lead of the plethoric group of breakaways is not progressing, around 2’20. No doubt there are too many 21 riders and some of them, like Uran, too well ranked overall for the peloton to give its blessing to a river breakaway.

2:26 p.m. : @Lensois from Morbihan Rigoberto Uran is certainly 3 big minutes in the general classification, but above all, his mountain and time trial skills make him a danger in general for the Pogacar team, but also for the teams aiming for a place on the podium. (like the FDJ or the Jumbo, for example). His presence could prevent the breakaway from taking a sufficiently comfortable lead before the big difficulties of the day.

2:06 p.m. : Hello FI, just to understand the strategies of the riders of the Tour… How does the presence in the breakaway of Rigoberto Uran irritate the other riders in this breakaway?

3:13 p.m. : Wout van Aert won the intermediate sprint and added 20 points to his total (already pharaonic) for the green jersey. Barring any breakage, the Belgian is practically guaranteed to bring it back to Paris.

1:57 p.m. : A group of pursuers led by Wout van Aert joins the breakaway group, which now has about twenty units. They are 1’20 ahead of the peloton.

1:49 p.m. : A large group of breakaways broke company with the peloton. Is this the right escape? That’s not certain, as other counter-attackers try to join in, while the presence of big names like Rigoberto Uran among the breakaways irritates some of the runaways. Year after year, the group of fifteen breakaways, which includes Thibaut Pinot and Warren Barguil, has a lead of almost a minute.

1:47 p.m. : The riders of the Tour, heroes of modern times, attracted by the lights of the city at the end of the stage. And on the Champs Elysées, Kid Tadej Pogacar should win. Unless David Gaudu or Romain Bardet disturb the Slovenian gold rush… You will understand that we are passing through the lands of Charlie Chaplin, who ended his life in Vevey, Switzerland, to whom a rustic tribute reached the side of the Tour route.

1:28 p.m. : And during this time, a rider from the Tour was flashed at more than 100 km/h during a descent, at the start of the stage. It was Belgian Lotto-Soudal rider Florian Vermeersch who was caught speeding.

1:19 p.m. : The injured of the day is the rider of the Israel-Premier Tech team Michael Woods, whose jersey was badly grated after his fall on a Swiss roundabout.

12:56 : The way of the cross continues for Ben O’Connor, the leader of the AG2R team, released at the start of the stage. The Australian rider, 4th in the Tour last year, has already lost a lot of time, and Vincent Lavenu’s team has already changed its priorities for the rest of the Grande Boucle, as evidenced by the attempt by house climber Mikaël Chérel to take the escape.

12:49 : The real start of the race has just been given, the breakaway of the day is trying to form. It’s an unwritten rule in the peloton, but when the breakaway gets its exit ticket, the peloton lets it take a bit of space, depending on the riders in it. And it is forbidden to try to place a counter-attack to join it. It is therefore essential to take the right wagon at the start of the stage.

12:40 p.m. : The fact remains that batteries of tests of all the runners are planned during the rest days. So a Guillaume Martin, who had the responsibility of being tested yesterday feeling less well, would have been detected. Note also the different nature of the sport: the tennis players do not move in a peloton by exchanging their droplets several hours a day for three weeks.

12:39 : Why wouldn’t the cyclists of the Tour de France do the same as the tennis players at Rolland Garros? By not testing yourself and not telling anyone? After all, they are seasoned athletes in good shape normally (though). Those who don’t want to run any risk can withdraw but let everyone make the decision that suits them best.

12:37 : @Maro It is the protocol established by the UCI with ASO, the organizer of the race, yes. The viral load is measured in particular after each positive test to measure the degree of contagiousness of the sick runner.

12:36 p.m. : Hello, Is the decision made to isolate only symptomatic runners still valid? Or are we also going to exclude asymptomatic positive runners from the Tour?

12:34 p.m. : @Helen I remind you that only positives with symptoms should leave the race. But hey, a non-symptomatic positive case maintained in the race remains in the peloton, where everything goes, so there is a risk of spreading the virus, including to other teams.

12:32 p.m. : isn’t it shooting yourself in the foot to test the whole peloton? They will of course find positive cases and surely among the favorites. Isolating everyone is certainly impossible. Is there a good solution… 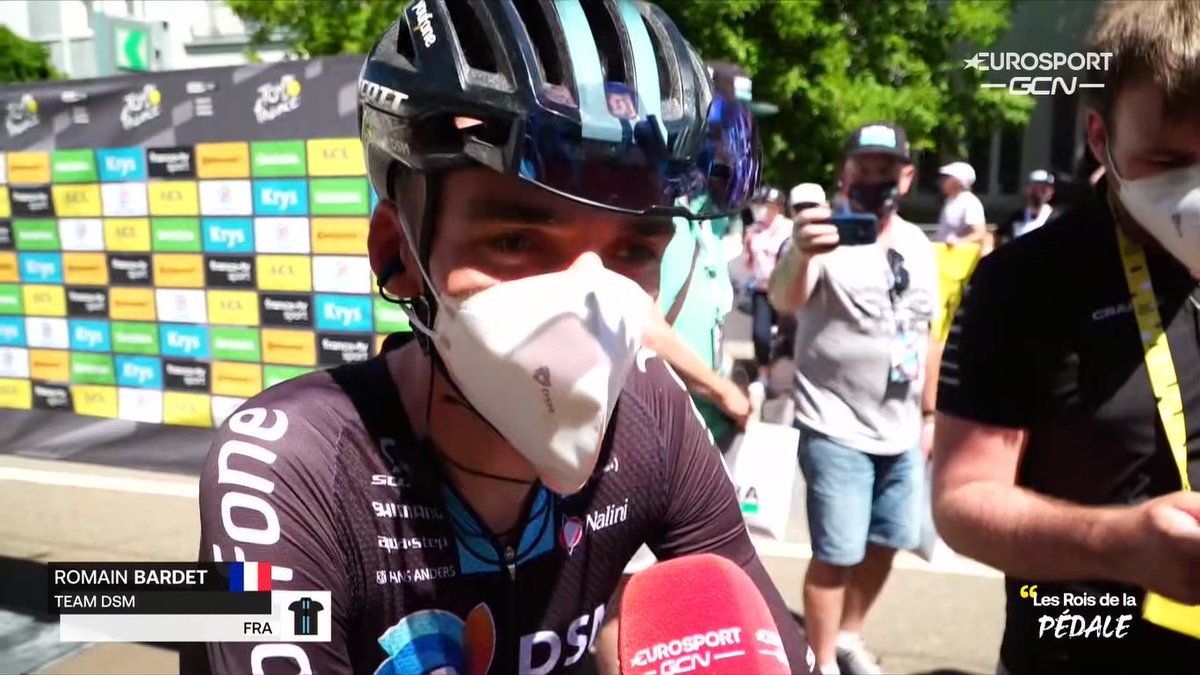 12:29 : History to weigh down the morale of the tricolor supporters, Romain Bardet told Eurosport that he suffers from the knee.

12:20 p.m. : The manager of the Cofidis team, Cédric Vasseur, explains that Guillaume Martin is suffering from a Covid which will develop in the coming days, and that the wisest decision was to withdraw him from the race. “Tonight we will have a clearer photograph of what is happening in the peloton”adds Cédric Vasseur at the microphone of France Télévisions. All runners will be tested tonight and tomorrow, during the rest day.

• A hot day ahead on the Tour de France route, with a mountain stage in the Alps to follow live on our website (the cheat sheet to revise everything can be found here). Guillaume Martin, leader of Cofidis and one of the main French hopes for a good appearance in the general classification, was forced to retire because of the Covid.

• A strong heat wave is expected next week, even if Météo France cannot yet determine its extent.

• The situation remains uncertain in Sri Lanka, where President Gotabaya Rajapaksa has agreed to resign next week after being forced to flee his overcrowded residence.

• The fire which ravaged more than 650 hectares of vegetation in the Cévennes is now kept “under surveillance” by some 350 firefighters.

12:05 : The full interview with Guillaume Martin, just before his forced and forced abandonment, can be found here.

12:04 : “It’s still a bike race, I don’t have any serious symptoms, I don’t think I’ve infected anyone and the main thing is still there.”

12:04 : Guillaume Martin, leader of the Cofidis formation, is forced to leave the Tour de France after a positive test for Covid-19, before the start of the 9th stage. He is the third rider who has to leave the race because of the virus, the first who had a say in the general classification.

11:35 a.m. : 🚴 stage 9: fly over a chocolate factory on the way to hover above the starting line but no time to go down to taste a few white squares. Because… there is a 2nd category pass followed by two 1st category passes today, on the main course, so my forecast for July 10: winner David GAUDU / N91 Have a nice day everyone. 11:32 a.m.

11:35 a.m. : It’s the return of the predictions of@Yellow Eagle (and last year, he was formidable in precision)!