The PSG home jersey for the new 2022-2023 season has just been unveiled by the capital club’s equipment supplier, Nike. A concept marking the return of the central band.

The Parisian fans were waiting for it, they are now served! Unlike last year, when PSG unveiled its new home jersey on May 14, the capital club this time made the suspense last a little longer. But the home kit for the 2022-2023 season has arrived, presented by Nike and the Rouge et Bleu this Wednesday.

The return of the band

This new creation from the famous comma brand should not displease purists, since after having designed a particular tunic, on which the swoosh had given way to the Jordan Brand logo, the Nike logo is back on the outfit. that Christophe Galtier’s men will wear (its formalization is imminent) in their garden throughout the 22-23 financial year.

Finished the plain home jersey inspired by the codes of basketball, the famous vertical strip located in the heart of the garment is making a comeback. Always in a dominant blue, thus respecting the traditional history of residents of the Parc des Princes, this new Parisian top therefore sports a wide white band surrounded by two much thinner red bands on each side.

It is precisely on this white part that we find the Nike comma, represented in black to better stand out, in the center. The Paris Saint-Germain crest reigns just above the swoosh of the American company, official equipment supplier of the reigning French champions since the 1989-1990 season, bringing in around €75 million for the Parisian leaders. 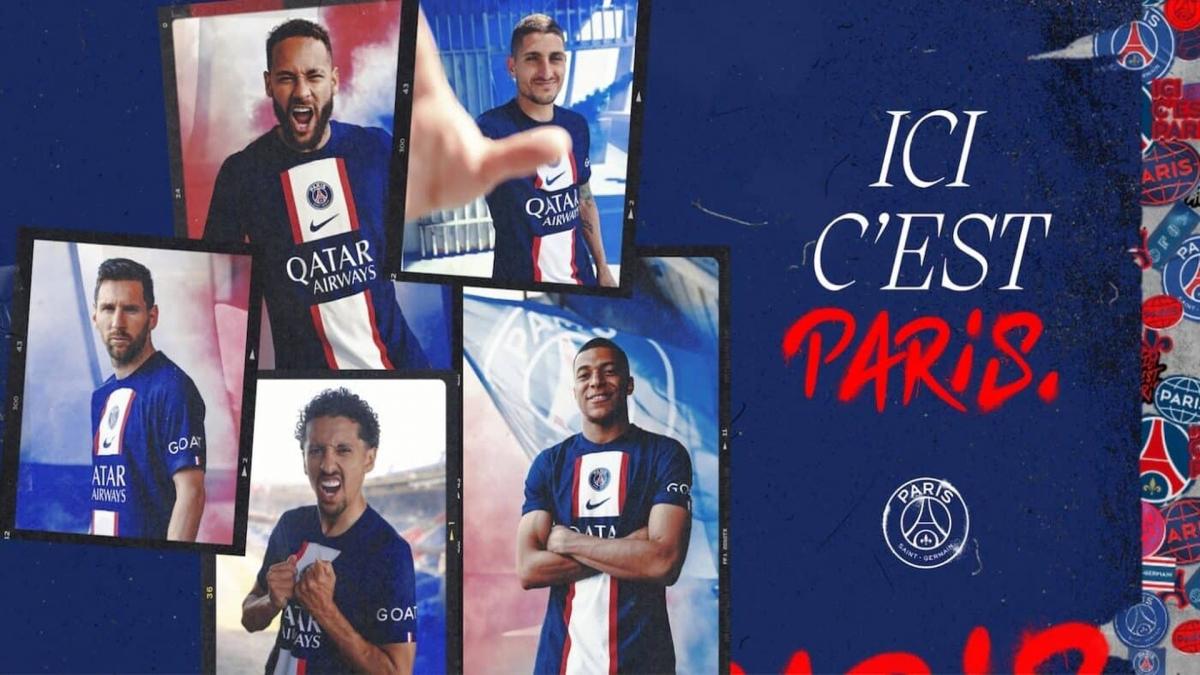 It should be noted that the sponsor ALL (Accor Live Limitless), which paid between 50 and 70 M€ per season to PSG to appear on the front of their shirt as main sponsor, saw its contract with the formation chaired by Nasser Al- Khelaïfi come to an end in June 2022, after three years of collaboration. The hotel group is thus replaced by Qatar Airways for several seasons.

Unlike the home jersey worn by Kylian Mbappé, Lionel Messi, Neymar Jr & co last season, red therefore takes on a more central and much more visible place this year. This band is, in a way, an “inverted Hechter”. Sign, there too, that Nike and the PSG wish to prove to their fan that the home tunic made for the first steps of La Pulga in France was only an enchanted parenthesis.

Delighted, the supporters of Paris SG hope that the season will be much more so on the meadow. Because, with a workforce of such a level, the Ile-de-France team is increasingly under pressure to achieve its ultimate goal, which remains that of finally winning the Champions League. The new armada formed by Luis Campos will wear navy-colored shorts and socks to try to fulfill the dream of an entire people.

Discover our new 𝐦𝐚𝐢𝐥𝐥𝐨𝐭 𝐝𝐨𝐦𝐢𝐜𝐢𝐥𝐞 @nikefootball for season 22/23 🟥🟦
For the first time, our partners @Qatar Airways and @goatapp make their appearance on the kit of the first team.#𝐼𝐶𝐼𝐶𝐸𝑆𝑇𝑃𝐴𝑅𝐼𝑆

This new PSG 22-23 home shirt will be available very soon on FOOT.FR!